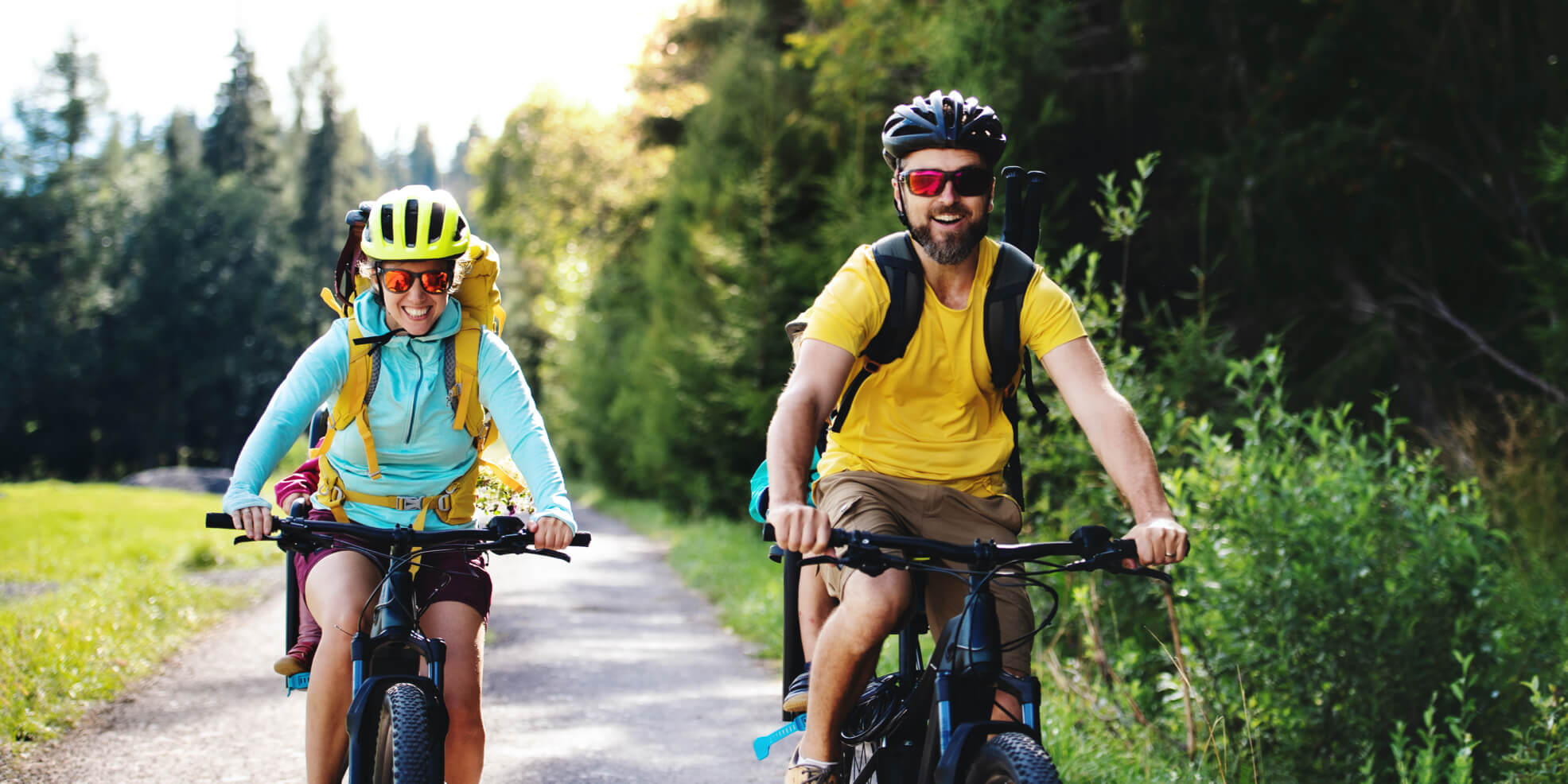 Sydney is known for the great variety of bike paths it offers. Whether you’re after leafy parklands, peaceful lagoons, stunning beaches, the wonder of national parks, or want to go sightseeing across the Sydney Harbour Bridge, there’s something for everyone.

While Sydney only added 1.5km to its CBD bike paths in the past ten years, the massive increase in cycling since the start of the pandemic saw 7km of dedicated bike lanes built in the second half of 2020 – showing the city’s commitment to improving their cycling infrastructure after being branded “the city that hates bikes” in 2010.

Whether you’re a new or experienced cyclist, riding a bike is a great way to experience the city – and we’ve got your back. Here’s our list of our five favourite Sydney cycling trails suited to beginners, families, and explorers alike.

Located in the eastern suburbs of Sydney, the renowned Centennial Parklands prides itself on being “one of the most cycle-friendly public spaces in Sydney” and welcomes over 750,000 cyclists annually.

Open from sunrise to sunset, the 3.5km Grand Drive Cycle Lane loop is popular among cyclists, but you don’t have to stick to the loop – there are dedicated bike paths and mixed-use pathways throughout the park, so you can explore wherever your mood takes you (except where the signage says otherwise, of course).

Because the Grand Drive Cycle Lane loop is so popular, it can get quite busy in the high season so make sure to keep an eye out for faster cyclists who may be trying to pass you and always observe the road rules. If you’re serious about your fitness you can even join one of a number of training squads operating in the park.

If you’re a beginner cyclist or riding with kids, you can hop on the one-way Learner’s Cycleway that’s open to cyclists of all ages and skill levels. The cycleway is dotted with amenities, including a playground and barbeque area.

Because there’s such a mix of age groups and skill levels in the park, Centennial Parklands places an emphasis on safety, so make sure you follow the rules when on the bike paths:

Enjoy an idyllic ride along the river between Parramatta Park and Sydney Olympic Park on the Parramatta Valley Cycleway. The scenery is beautifully distracting, but make sure to keep your eyes on the road! The bike path itself is 15km, but because you can start and end the ride wherever you like, it can be as long or as short as you choose. You can also catch the Parramatta RiverCat Ferry back if you only want to cycle in one direction.

If you want to increase the distance of the ride, you can do a few loops around Parramatta Park, or ride into Westmead and connect to the M7 cycleway – which could add 40km to your ride, if you’re feeling up for it.

The shared path is designed to accommodate cyclists of all ages and abilities, so it’s the perfect location for a family day with a post-ride picnic in Parramatta Park or Sydney Olympic Park. If you’d rather go to a restaurant or cafe, there are also loads of options to choose from in both parks. The end of the ride is a short distance from Elizabeth Farm, one of Sydney’s most historic properties and now a museum, and is a great spot for a day out with the whole family.

Looking for a long leisurely ride? One of Sydney’s oldest and most popular bike paths, the Cooks River Cycleway is an out-and-back shared path that spans 23km and takes you along the picturesque Cooks River.

On the way, you can pause in town centres, explore historical sites, spot wildlife, or simply take a break at one of the many cafes or restaurants along the route. We recommend making a full day of it and enjoying all there is to see and do at your own pace.

If you ride the full bike path to Botany Bay and back to Settler’s Park, you expect 46km of easy riding. But, if you’d prefer a shorter ride or are cycling with kids, there are multiple entry points along the path – so you can start and end it wherever you’d like.

If you consider a 46km out-and-back ride a piece of cake, this one is sure to get your legs working. Even better, it’s motorist- and traffic-light free for the entire 40km path.

If you start your ride in Glenwood or Prestons, you can double back on your route and enjoy an 80km ride. But, if you aren’t quite in the mood for such a long distance, the path offers more than sixty entry points, so you can tailor your ride to suit you.

Wherever you start, make sure you bring enough water because there’s only one area to fill up (around halfway between Glenwood and Prestons). The route attracts thousands of cyclists and pedestrians over the weekends and can get quite busy.

If you’d prefer a ride with fewer people (but more motorists), cyclists are allowed on the Westlink M7. Note that riders are not permitted on the traffic lanes – only on the shoulder. Be careful when crossing over the M7 vehicle Exits and Entries and keep these safety tips in mind:

What could possibly be better than sweeping coastal views, a mix of on- and off-road riding, and a post-ride reward of beer and pub lunch at Cronulla beach?

Begin at Tempe Recreation Reserve and ride the pathways over Cooks River, Brighton-Le-Sands and Sans Souci (where you’ll ride right along the coast of Botany Bay). If your stomach is already rumbling at this point and you can’t wait to get to Cronulla, you’ll be spoilt for choice here with a range of options to grab a bite.

From there, continue on the path until you reach Captain Cook Drive and keep riding to Kurnell. Then, you can choose to extend your ride into Kamay Bay National Park, where you might spot some whales at Cape Solander Lookout, or meander down to Cronulla beach.

Double back home, or catch a train home if you’re not feeling up for the ride. Altogether, this ride is 30km – 45km one way, depending on whether you choose to extend it, and reasonably easy. The perfect ride for a long, carefree morning.

With over 2,000 trips taken across the 2km Sydney Harbour Cycleway every weekday, this route is by far the most popular in the city. When it first opened in 1932, the entire bridge was open to cyclists but, with increased traffic, a dedicated bike path was created. Since then, it has been illegal for cyclists to ride on motor traffic lanes.

The bridge links Sydney’s Central Business district with the North, giving you spectacular views of the city from the world’s largest steel arch bridge. Of course, once you’re on the bridge you’ll want to climb the iconic BridgeClimb from Cumberland Street (where there are loads of options for bike parking).

After years of back-and-forth surrounding the 55 steps cyclists have to climb to get on or off the bridge on the north side, in September 2021 Transport for NSW announced that they’d progress plans to build a cyclist-friendly ramp – an important step that sends the message that Sydney is truly a cycling-friendly city!

Stay Safe While Cycling in Sydney